During the investigation, Prince elsani first came to the exhibition center of the group to learn more about the development process, corporate honors and representative projects of Beijing Urban Construction Group, and expressed appreciation for a series of remarkable achievements made by the group. Subsequently, the two sides held in-depth discussions and exchanges on issues in the field of cooperation. 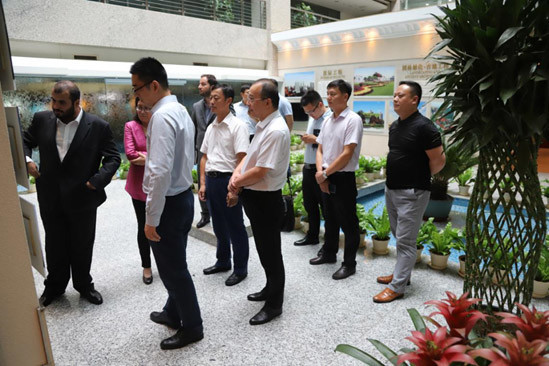 Wang Liping, deputy general manager of Beijing Urban Construction Group, extended a warm welcome to the prince and his delegation and introduced the situation of urban construction group. She pointed out that Beijing Urban Construction Group has implemented the "going global" strategy under the condition of increasingly saturated domestic market, completed the construction tasks of a large number of key projects in many countries and regions, and continuously improved its brand influence, scientific and technological innovation ability, comprehensive strength and social influence. Qatar has a stable political situation, good social security, rich natural resources and strong demand in the field of infrastructure. Urban construction north group, a subsidiary of urban construction group, went to Qatar to participate in project construction as early as 2007. It has been nearly ten years now. During this period, North Group has successively undertaken a number of projects such as Doha bin Mahmood residential building project, Qatar solid waste treatment station and Doha residential entertainment city. The construction progress is fast, the quality is good and the standard is high, which has been unanimously praised by the territorial Government and the construction unit for many times.

One belt, one road, China has been committed to "all along the road", cultural and financial exchanges, and has promoted the pragmatic cooperation between the two countries to a higher level, said Prince Al Sani. As the "host" of the 2022 World Cup, Qatar is currently building competition venues, transportation roads, hotels and other facilities. At the same time, Qatar has formulated the 2030 vision plan, put forward the four development concepts of "human, social, economic and environmental", and is committed to building the card into an advanced country with sustainable development. As part of the development concept, the Qatari government will focus on promoting the construction of roads, bridges, pipelines, venues and other infrastructure. The follow-up construction volume is large and there are many tasks. As one of the "ENR global and international engineering contractors", Beijing Urban Construction Group has built a series of difficult and influential projects such as the bird's nest and the National Grand Theater. In particular, your company has built a number of projects in Qatar, which has made positive contributions to promoting the development of Qatar. The prince sincerely wishes this cooperative relationship to continue, and sincerely hopes that Beijing urban construction and urban construction north can continue to participate in the follow-up national construction of Qatar, and looks forward to more extensive and in-depth cooperation with urban construction in the future.

During the discussion, both sides expressed a strong desire to strengthen cooperation and reached a preliminary consensus on the main direction of cooperation and government policies in the future. In the future work, Beijing urban construction and Northern Group will fully promote the implementation of various projects and jointly play a new movement of win-win cooperation and common development between China and the world.