On April 2, the group held a comprehensive meeting on party affairs and administration to convey the spirit of relevant meetings and documents of the group and deploy various key work such as party affairs, trade union, administration and publicity in the future. A total of 46 people, including Secretary of Beijing Tianjin Hebei Party branch, chairman of trade union branch and office director, attended the meeting, and video of foreign projects attended the meeting. Yan Qiang, deputy secretary of the Party committee and Secretary of the Discipline Inspection Commission of the group, presided over the meeting.

At the meeting, Zhang pengke of the general office read out the key points of Party committee work in 2019. Jiao Chen, vice chairman of the trade union and Secretary of the general branch of the Youth League, arranged the preparations and arrangements for the third workers' games. Zhang Ying, deputy director of the president's office, read out the notice on Commendation of advanced units and excellent correspondents in 2018 news reports, and interpreted the key points of publicity, ideological and cultural work in 2019. 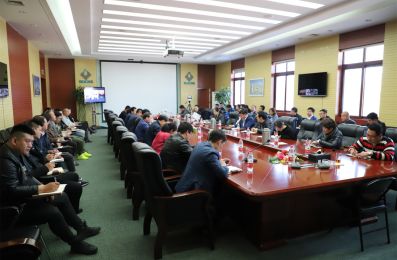 Wu danxuan, chairman of the trade union, read three circulars including the commendation notice on the advanced trade union branch and outstanding trade union cadres of North group in 2018, and pointed out that the trade union work has a long way to go in the future. The trade union should combine the actual situation of the enterprise, grasp the situation, highlight the key points, constantly improve the organizational structure, continue to promote the construction of workers' small homes, continue to carry out positive and healthy workers' recreational and sports activities, enrich the spare time life of workers and promote the production and operation of enterprises, Build harmonious labor relations.

Yan Qiang, deputy secretary of the Party committee and Secretary of the Discipline Inspection Commission, comprehensively summarized the work in 2018 and made key arrangements for future work. First, strengthen communication with local organization departments and do a good job in the daily management of the Party committee. Second, pay close attention to the construction of Party style, clean government and anti-corruption, unblock the channels of prosecution and disclosure, and supervise the efficiency of projects with potential loss risks. Third, do a good job in rotation training, education and cultural publicity activities for all staff. Fourth, do a lot of publicity work, and increase the on-site CIS visual inspection, assessment and standardized application. Fifth, further strengthen the management of administrative work and stability maintenance, strengthen the management of appearance and seal, and strengthen the construction of administrative personnel echelon.

Wu GUI, Secretary of the Party committee, put forward specific requirements for future work: first, we should continue to deepen the daily work of the Party committee, adhere to democratic concentration on major matters and major decisions, and make them normalized and institutionalized. Second, we should strictly implement the "three meetings and one lesson" and other systems, and pay close attention to the construction of Party style and clean government among party members and cadres. Third, give full play to the role of the political core and fighting fortress of the party organization, give full play to the vanguard and exemplary role of Party members, unite and lead the majority of employees to overcome difficulties and forge ahead tenaciously.

It is hoped that all systems can continue to adhere to the main responsibility system of "the same responsibility for the party and the government and double responsibility for one post", adhere to "strategic guidance and cultural drive", further strengthen planning and guidance, plan and develop their respective work tasks, and create a good atmosphere for employees to "rest assured at work, live comfortably and have peace of mind for their families", so as to provide a strong guarantee for the successful completion of the group's annual tasks.

At the meeting, awards were also given to advanced units and individuals with outstanding performance last year. And carried out the publicity and implementation of the system. (corporate publicity)